Founded in 1997 and based out of UBC’s Faculty of Education, the Centre for Group Counselling and Trauma assists military veterans in transitioning back to civilian life.

Building on the work of the Veterans Transition Program (founded 1997) the Centre has refined and developed 20 years of programming to create an approach to group counselling for veterans dealing with trauma that today is delivering unpresented results.

The Centre founded the non-profit Veterans Transition Network to administer the Veterans Transition Program when it expanded nationally in 2012. For the first time, the program is now available in six Canadian regions and provinces—British Columbia, Alberta, Manitoba, Ontario, Quebec and Atlantic Canada.

In 2018, the Centre for Group Counselling and Trauma opened a Clinical Training Centre, also housed at UBC’s Faculty of Education, to train clinicians to work in the Veterans Transition Program as a result of the program’s success. While 1,000 veterans have completed the program, there are more than 400 on a waiting list. To train clinicians is a current priority in order to reduce this waiting list.

Of the first 1,000 vets who took the courses that make up the Veterans Transition Program (the courses occur on three weekends over a six week period) 98% completed the full program; of that 98%, approximately 90% have moved on to new career opportunities and have again become productive, contributing citizens.

Dr. Westwood and the Centre’s 20 years of research and refinement have produced findings that are changing the landscape of trauma treatment, especially those findings which point toward a change in how vets seek help for operational stress injuries (commonly known as Post Traumatic Stress), the symptoms of which can include debilitating levels of depression and anxiety.

This acceptance of the Veterans Transition Program by vets may be attributed, in part, to the vets themselves contributing to the program over its 20 years of development. This feedback from vets has been critical to the program’s success. That the three-weekend program is held over six weeks plays to this dynamic: it is to provide ample time for
attendees to integrate their program experience and offer their feedback.

—  Group Couselling—The program has broken new ground in group therapy, showing that it may be benefitting vets in ways that traditional one-on-one counselling does not. The reasoning is that soldiers are not accustomed to working on their own; they are trained to work in groups, as a member of a platoon or unit. The notion of the group, then, was identified as a comfort zone for vets; so the group setting became the foundation that the program’s entire model is built on.

—  Therapeutic Enactment—Another of the course’s innovations is theatre-inspired Therapeutic Enactment exercises, where vets use actions as well as words to describe the traumatic events they’ve experienced. This is based on how a vet’s trauma is not caused by words; it is caused by actions they were part of or had witnessed. Some of these traumas, therefore, can’t be repaired just by talking.

—  Accessibility—The program operates independently and has both government and private sector funding. Yet while Veterans Affairs has since become a funder of the program, Veterans are not required to go through the full application process with VAC.

Tim Laidler, executive director of the Centre of Group Counselling & Trauma, is himself a veteran who has taken the course. Mr. Laidler served a tour of duty in Kandahar in 2008. Coaxed into the program by a concerned friend, it helped him get his life back on track and inspired him to do a Master’s degree in Counselling Psychology. Mr. Laidler credits program founder Dr. Marv Westwood, a psychologist and Professor Emeritus with UBC’s Faculty of Medicine, for the program’s success.

“Marv and his colleagues have refined this work over 20 years, always listening to the feedback offered by the vets themselves,” says Mr. Laidler. “So much time has been devoted to helping vets come forward to ask for help. Now they’re coming forward. That tide has turned. The challenge now is having enough trained clinicians to help them.”

The impact of military trauma, with its often debilitating symptoms of anxiety, depression, shame, low self-esteem and isolation has devastated veterans and their families for generations. That nearly all of the vets who complete the Veterans Transitions Program report benefits, including reduced trauma symptoms and decreased depression, points to a bright future where past traumas can be repaired and life can go on. 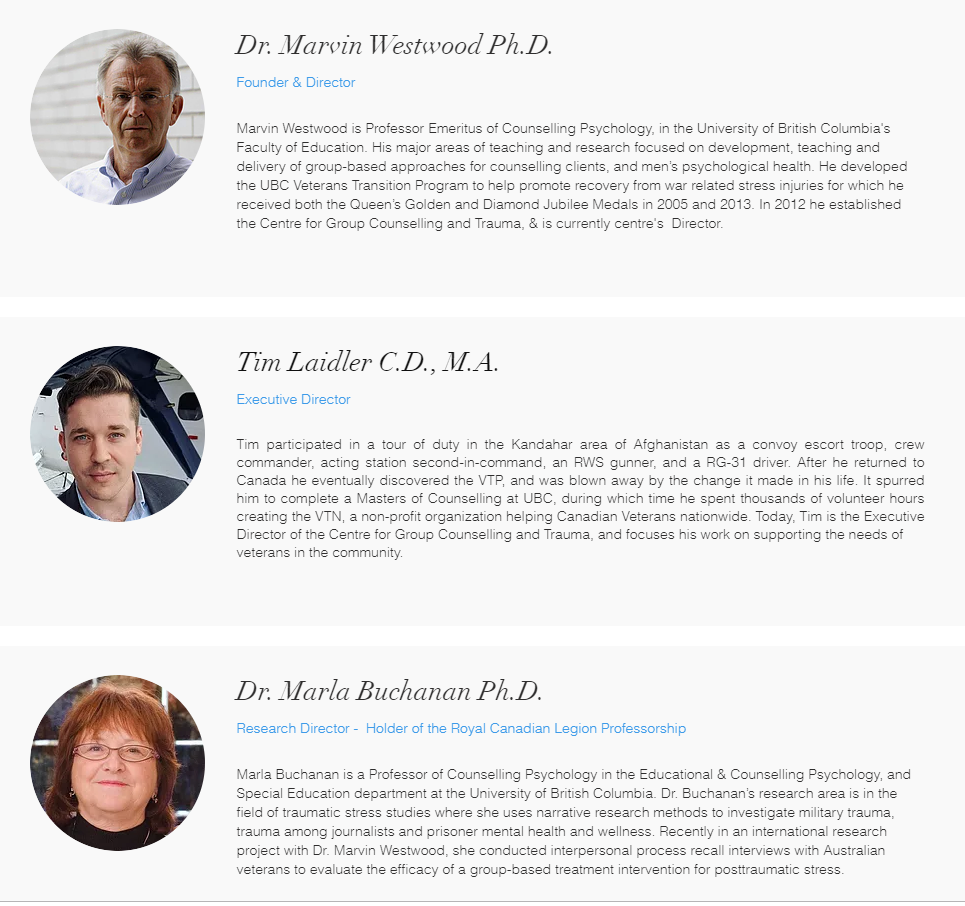